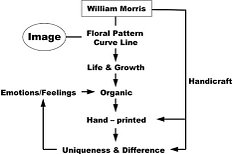 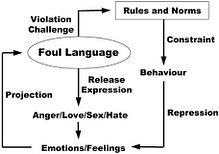 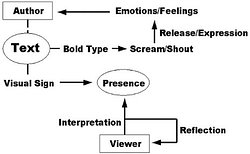 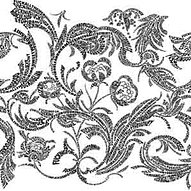 - Some notes on the work "Interior"

Image and text are two different representation structures. One is pictorial and visual without any specific verbal linkage while the other is the written form of language and is therefore, linguistic, which means readable and pronounceable. This suggests that, like image, text is also a visual sign.

Meaning (signified) of an image is rather unfixed, obscure and open to different interpretations but it is rather clear in text. Text functions as a guide to direct the reader to perceive and to interpret meaning in a certain manner. These perceptions and interpretations, on the other level, are also affected and conducted by norms, beliefs, common sense, etc. The materiality of text is different from that of image since it contains both representation modes, verbal and visual. Based on different relationships between these aspects, text can be roughly divided into two categories: passive text and active text.

Passive text appears as linear, calm, and smooth with uniformed size, typeface and colour in order to serve its main and the only purpose suitably, that is to present and transport the literal meanings or ideas to the reader smoothly. Any additional visual interpretation or distortion is unnecessary, unfavourable and even discouraged. Its linguistic and literal features are so overwhelming and dominating that its visual properties have almost been suppressed completely. To some extent, we could say that passive text only serve as linguistic sign.

Active text, on the other hand, put its emphasis on both its literal meanings and visual appearances in which the latter is used actively to enhance and intensify the former. The visual elements in active text play a more important role than that in passive text.

The idea of using its form to intensify its content and literal meanings was first clearly advocated in Marinetti's Manifesto of Futurism1 in 1909. “When necessary, we shall use three or four columns to a page and twenty different typefaces. We shall represent hasty perceptions in italic and express a scream in bold type. “ Active text becomes recognised as a written form of language, as a visual sign apart from its linguistic features. After this, text no longer remains passive in all circumstances.

Foul language is an informal or underground language that has always been ignored, neglected or even condemned for insulting people which, obviously, is one of its purposes but there should be more. Its usage could be considered as a way to violate, challenge and escape from the social rules and norms which, like language, are also imposed on every member of the society and constrain one's behaviour from the very beginning of his or her childhood. These are shouts, expressions and releases of one's repressed and constrained feelings and emotions such as anger, hate, depression, etc. which, in turn, makes it become powerful and energetic. We can say that this, in some ways, forms a crucial part in reflecting and revealing our thinking and suppressed emotions in the conscious or unconscious mind, which we may have missed.

Handicraft & the Uniqueness of Emotion

Our mind is complicated and is in a state of flux that every single sort of emotion affects and motivates one's behaviour in every single aspect. It is restless, organic and warm, and, keeps fluctuating and flowing all the time. Even if they look similar, they are still unique and different. These prevent us from having and experiencing the same kind of things and feelings twice like Heraclitus' idea of impossibility of stepping into the same river twice.

“Everything made by man's hands has a form, which must be either beautiful or ugly … it cannot be indifferent”3

“Interior” is hand-printed on paper for the reason that mechanical production of images excluded almost all the physical and emotional involvement of human from a work, which would finally become a uniform machine product without any difference. This, in turn, creates a great contradiction between the uniqueness of emotion, feeling and foul language. Every involvement of the artist injects energy and life to every text and language about emotions and feelings, making it belongs to human rather than an emotionless machine.

By using William Morris' design as a reference, “Interior” apparently taken his ideas of handicraft and rejection of stereotyped machine production, which, at the same time, matches with the uniqueness of emotion and feeling. For Morris, renewal of handicraft is a way for the rebirth of art which, he saw, had been threatened by the machine and its stereotyped production. Art should be made by the people and beautiful art should be in accord with Nature. This could, then gives joy to both the maker and the user, and, ultimately, helps to re-shape art and the society.

These similar but unique hand-printed Arial bold type text covers all the surfaces of a room from the ceiling to the walls and the floor, which combined with the site and its interior space. For the viewers, they are entering into a specific interior space, someone's or many others' psychology and minds, which is screaming and shouting, surrounding and encompassing them.

Visual presentation of the language makes it gain its own presence, detached from one specific speaker. It becomes visually present in the space in an implicit way that allows viewer to realize, to read and to discover the ‘voices' and emotions underneath in his own way without any constraints from a fixed reading time, sequences and interpretation. During the processes of realization, discovery and interpretation, one's subjectivity would inevitably be projected into and thus by examining one's interpretations, his or her interior and thinking could also be revealed.

Combining the foul language (text) with Morris' floral pattern (image) and arranging the text in the form of flowers and plants, which are swirling and running throughout the space, helps to link up their organic force that underneath both Nature and human on one hand, and, on the other, creates different layers of interpretation in which image is the embellishment, the surface while text (foul language) and the emotions attached are the latent and the fundamental. These shouts present in the space but they only appear and exist in one's mind after being discovered and realized.

One's view or prejudice sometimes hinders oneself from gaining different sources of knowledge and information from different perspectives. Interior”, therefore, provides a space for the viewers to re-examine their reading and viewing habits, whether they would look only at the surface, the outer space of an object or thing, or would rather take time and make effort to dig inside to the content and the inner space in order to search for the entirety. Furthermore, it is about their views and attitudes on some minor, marginal and informal things and ideas. One would keep reading and discovering or one would rather ignore its presence and even prefers its absence in the space.

“The artist becomes a manipulator of signs more than a producer of art objects, and the viewer an active reader of messages rather than a passive contemplator of the aesthetic or consumer of the spectacular”4

Massive circulation of information paves the way to the dominance of visual imagery in the modern society, for which could be consumed rather shortly than reading text since reading takes a longer time. What have finally received by the viewer are those have been selected and chosen. This also means that a certain amount of information has been missed, neglected or excluded intentionally or unintentionally. Questioning those accepted, believed and favoured ideas, rules and norms, in my opinion, helps to open a space for re-examining the neutrality and normality of the ideas and things that we have taken for granted or which have been imposed and educated by the others and the society. This interrogation also helps us to look and think in a different perspective that we may have missed or ignored.