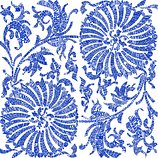 As part of China, Hong Kong has been handed from the Chinese to the British for more than a century and finally re-united with its motherland in 1997. This separated not only a group of people from the mainland physically but, at the same time, alienated and created a particular group of Chinese people who have a unique, strange and shifting views on their own identity, nationality and relationship with Chinese from mainland as well.

The floral pattern chosen for this project was designed by British designer but it may be surprising to know that it actually drew its inspiration from the Chinese.

“When we now see motifs and patterns of this type we don't immediately think of them as being Chinese; rather, we tend to regard them as prime examples of 19th century English design – imagery that we associate with Victorian designers such as William Morris.”1

A traditional Chinese pattern, after different interpretations, would change entirely and even seems to belong to other style. And probably, no one would recognize or realize this without noticing its background and history. The choice of this mid-19th century pattern for my wallpaper prints is an allusion to the historical background of Hong Kong: A British design with Chinoiserie undertone is given new interpretation by Hong Kong-Chinese artist.

On the other hand, placing the works on the floor suggests the idea of the floor/earth as motherland and territory. It is outlined and separated from the rest and exists in its own space. When people walking into the space, they would realized their own existence and presence in this specific space, which seems to be a Western Territory at first sight but is actually originated from the East; looks elegant but actually full of different voices and views about their own identity, nationality and Chinese people from other places. Anger, jealousy, hate, etc… All exists in the space around each individual self which might be repressed or ignored. Without giving a closer look, the viewer would then miss these messages or voices which belongs to everyone and inside everyone's mind in this place.